Dua Lipa was seen in a casual outing with friend in casual look after having date with Trevor Noah! 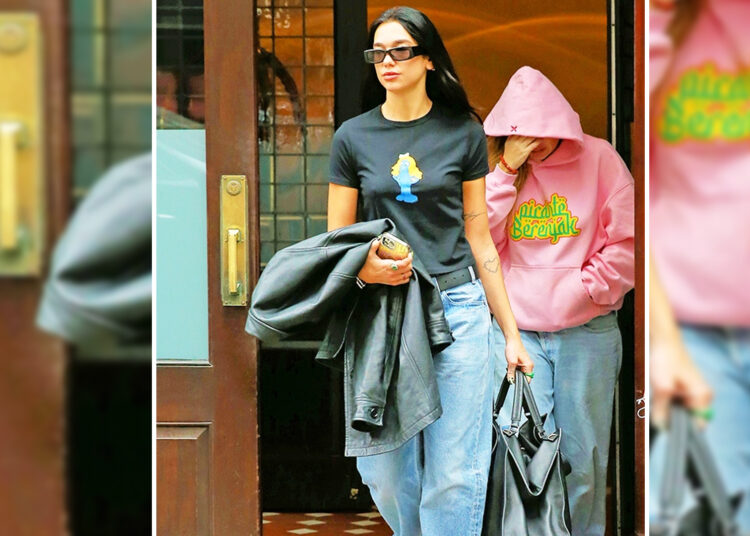 Dua Lipa Update: The month of September and October was full of fashion when we talk about some celebrities in Hollywood. Especially those who are attending many fashion shows and giving back-to-back appearances that are coming with full style. Among them are some celebrities who have also made headlines during the events because of their love life. Dua Lipa is one of them as she was recently seen in baggy jeans after having a date with Trevor Noah.

The 27-year-old singer Dua Lipa was recently seen wearing the trendy Baggy jeans, just a few days after having a date with the host Trevor. She was seen in a very 20s look while wearing loose Denim and a black shirt. She was seen wearing all these in New York City on 1 October.

Adding more flavour to style, the singer was seen in sunglasses and a large leather bag in her hand. She was also seen holding a leather jacket in her right hand. The look was very casual but when it comes to the style then she carried it very well. She was also seen with a friend who was also wearing baggy jeans and a pink sweatshirt.

The singer Dua Lipa recently made headlines related to her dating life with Trevor Noah. She was seen that a restaurant on 28 September 2022 with the show host. They both were seen at a dining table getting very close to each other. According to a witness, the couple kissed each other and hugged while leaving the restaurant.

The rumoured of the date came when both of them were photographed kissing each other on the street on the evening of the same day. They immediately sparkled the rumours as Dua Lipa is seeing some potential with this relationship.

According to the source, the singer has told her friends that she is having an amazing time with him and thinks that Trevor Noah is very sweet. And that is the reason why she is seeing some potential because of their great chemistry. The couple is not committed to this relationship as they don’t want everything to become very serious at an early stage.

Dua Lipa also appreciated their honesty of Trevor and confidence. Coming from their previous relationship with the singer then she dated the younger brother of Gigi Hadid and Bela Hadid, that is Anwar. The relationship lasted around 2 years when they decided to separate in December 2021.