Kim Kardashian flaunts her abs in the latest post on Instagram. Recently she added a short video clip for their followers wearing a shimmery tiny black bra matching with a choker around her neck. as she is looking bold and sexy in a black shimmery bra.

by Riya Sinha
Reading Time: 4 mins read
A A
1 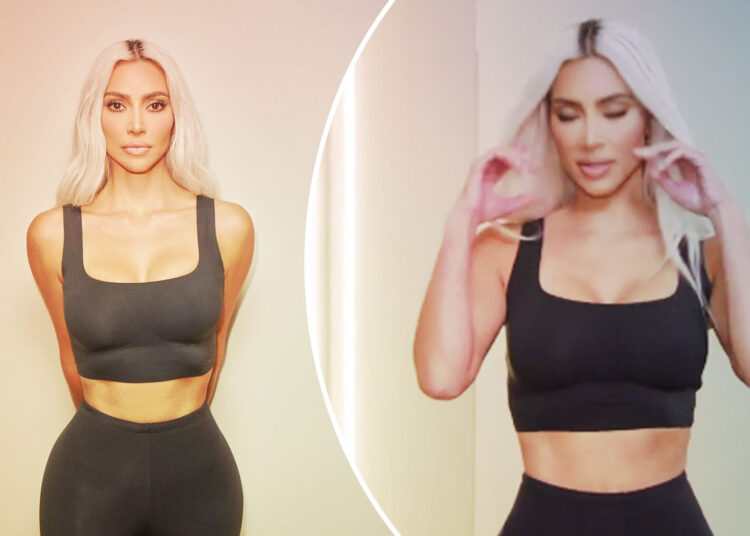 Kim Kardashian posted a new video of herself on Instagram wearing a glittery black bra matching with choker from Dolce&Gabanna. She is looking splendid as she wears shimmery black leather pant.

How can a 41-year-old lady show herself too boldly? We are living in a era where women’s generally gain weight after having a child but after looking such wonder women like Kim Kardashian we need to upgrade ourself, not much but a little we should focus on some physical fitness too along with our day to day work.

This is not the first Picture of Kim Kardashian flaunting herself in bra. On Tuesday 27th of September she has posted a Picture for SKIMS bra launch. There she wore a black tights matching with black bra.

Once she posted in the gym carrying a n*de bikini where she mentioned  “I do my own heavy lifting” in caption section. A mother of four children never compromised with her fitness. Always she is refurbish for her followers giving them seductive look.

Kim is an American socialite, media personality, and a wonder business women. A perfect example for youth. Kardashian has developed a significant presence online across different social media platforms, including over 300 million followers on instagram,more than 70 million followers on Twitter.

She has released a variety of products tied to her name that is mobile game Kim Kardashian: Hollywood, in 2014, different a variety of clothing products, and the 2015 photo book selfish.

Meanwhile coming to the Latest post of Kim Kardashian.

In this video she is wearing a round black choker with hanging giant diamond enhancing her look. She is looking confident and bold while shooting her video. Shimmery look on her bra and tights giving a perfect and to her. Her short silky white hairs complements her look.

Fans are crazy about Kim Kardashian. She has made a black heart symbol in her caption with black background behind. She has shot very boldly by keeping both her hands on her head . Her nails are looking so big and pretty.

Let’s talk about her makeup she has put light pink makeup on her cheeks and all over her face. Black colored liner and mascara in her eyes giving her eyes big and bold look.

A few seconds of video clip made her followers day. Kim has added few pictures of own in her video in which she is looking confidently into the camera standing straight on the floor. While In another picture, she is seen holding a cloth wardrobe. It seems like she is promoting for some clothes brand. Let’s follow @Kim Kardashian to stay updated.