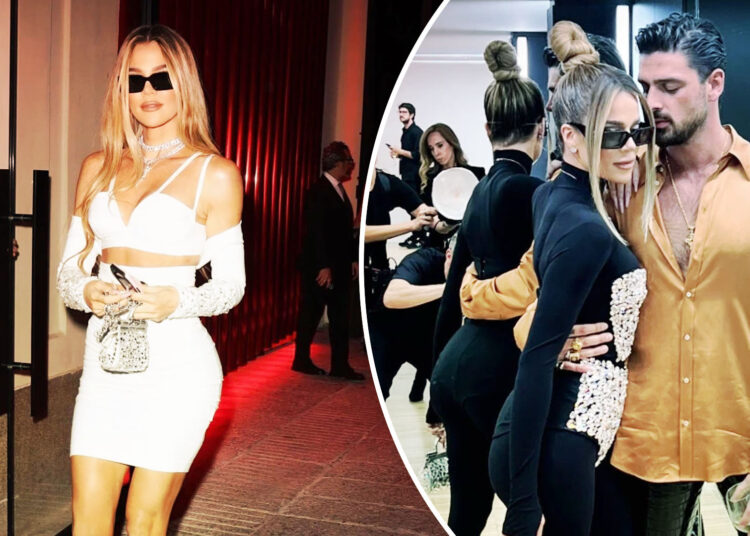 Morrone, 31, was dressed in black pants and an orange shirt unbuttoned to the center of his chest. Morrone threw his arm around the reality TV star in the photo, seeming to speak in her ear.

While the two haven’t said much about their connection or relationship other than sitting next to one other at the Kim x Dolce & Gabbana runway show, social media followers couldn’t get enough of them.

Also Read: Selena Gomez Shared First Teaser of My Mind And Me.

Here you can check out fans’ reactions as Khloe Kardashian and Michele Morrone were spotted together.

“Khloe Kardashian and Michele Morrone (Massimo) is a pair I never realized I needed,” one Twitter user commented on Saturday. At the same time, another stated that things were “low-key here” for this possible coupling.

“I’m shipping Khloé Kardashian and Michele Morrone so HARD,” a third social media user commented. The Italian native became famous as Massimo Torricelli in 365 Days, which premiered on Netflix in 2020. The film trilogy was inspired by the book of the same name by Polish writer Blanka Lipska.

Morrone told Decider last month, “I feel extremely happy inside because I’ve done something positive with my life.” “This trilogy transformed my life. It makes me happy. A little sad since that’s the end…or is it? I’m not sure. At the same time, I get the impression that a circle has been closed.”

As the film’s popularity grew, the onscreen love story of Massimo and Laura (played by Anna-Maria Sieklucka) quickly swept the globe.

“These days, it’s tough to discover true love since we’re bombarded with social media, this strange app, to find each other.” “And they discovered each other without using an app,” he exclaimed to the publication. “They met without the use of social media.” Their love bloomed so profoundly that it’s becoming rare to find these days.

When you think of poets from the 1890s, they used to write about love, and it was profound. They used to feel far more affection than they do today. Everything is a lot more mechanical now, and I believe the magic of 365 is to rekindle an old affection.”

Morrone, who looks unmarried, does not appear to have found love like Massimo and Laura. For her part, the Kardashians star has been single since Us Weekly announced in August that her relationship with a mysterious private equity investor had failed after just a few weeks together.

Khloé kept focused on her two children while navigating the single scene. She has a 4-year-old daughter, True, and an 8-week-old son with ex-boyfriend Tristan Thompson.

“It’s been this terrible cloud weighing over me since December,” the Revenge Body alum stated in the Hulu docuseries’ Thursday, September 22, episode after displaying her baby boy’s birth after the NBA star’s paternity controversy.”

“I’ve been unhappy and sad every day, and now that my baby is here, I can go on and enjoy.” It’s almost as if I’m finally getting to close that chapter and put this horror behind me. Now I can finally begin the healing process. Now I enjoy my life with two kids while figuring things out.”