List of notable movies in which Matt Damon has starred you must give a try to these movies if you are fan of Mr. Damon. 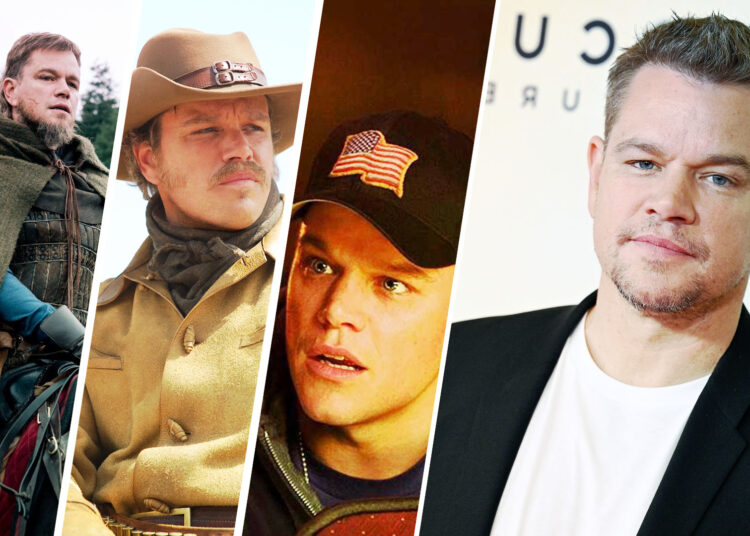 One of Forbes’ most bankable stars Matt Damon is an American actor whose place is among the highest-grossing actors of all time.

His filmography includes numerous successful and critically praised films which have garnered him a number of prestigious accolades.

Following is the list of most notable movies in which Matt Damon has starred:

In the 1996 war movie, Damon played the role of Specialist Andrew Ilario co-starring with Denzel Washington and Meg Ryan in lead roles.

This is a legal drama movie by Francis Ford Coppola in which Damon was cast in the role of a graduate of the University of Memphis Law School named Rudy Baylor.

Damon along with starring in the movie also served as a screenwriter with Ben Affleck. Gus Van Sant directed this psychological movie in the role of the titular self-taught genius Will Hunting.

This is Steven Spielberg’s epic war movie, which deals with the Battle of Normandy during World War II. Damon portrays the titular role of Private First Class James Francis Ryan.

This is a heist comedy movie that serves as the first installment of the franchise of Ocean and a remake of the same named Rat Pack film of 1960. Damon portrayed a pickpocket named Linus Caldwell as he co-starred in the film with George Clooney, Bernie Mac, and Brad Pitt.

This is the first of the Bourne films in which Damon was first introduced as Jason Bourne. Damon reprised this role in the sequel films which are ‘The Bourne Supremacy’, ‘The Bourne Ultimatum’, and ‘Jason Bourne’.

Martin Scorsese’s epic thriller movie cast Damon in the role of Staff Sergeant Colin Sullivan with Leonardo DiCaprio and Mark Wahlberg. He received a Screen Actors Guild nomination for Outstanding Performance by a Cast in a Motion Picture for this role.

This is a biographical crime comedy movie in which Damon starred in the role of Mark Whitacre, the titular informant in the movie.

In Clint Eastwood’s biographical sports movie Damon co-starred in the lead role with Morgan Freeman in the role of Francois Pienaar. The role garnered Damon an Academy Award nomination for Best Supporting Actor along with receiving nominations of Golden Globe and Screen Actors Guild Awards.

In this American Western movie, Damon can be seen starring in the role of a Texas Ranger named LaBoeuf.

This is Steven Soderbergh’s medical thriller in which Damon played the role of a man named Mitch Emhoff.

This is a biographical movie by Steven Soderbergh in which Damon was cast as an eighteen years old animal trainer Scott Thorson. Damon received a British Academy Film nomination for Best Actor in a Supporting Role.

Sci-fi movie ‘The Martian’ cast Damon in the lead role of botanist and mechanical engineer Dr. Mark Watney. Damon received his second nomination of Academy Award nomination for Best Actor for this role.

This is a sports drama directed by James Mangold in which Damon starred in the role of an ex race car driver and an automotive designer and builder of America named Carroll Shelby.

In this film too Damon contributed to writing the screenplay besides starring. The plot of the film is adapted from Eric Jager’s 2004 book ‘The Last Duel: A True Story of Crime, Scandal, and Trial by Combat in Medieval France’.

The story is set in France in medieval times and features Damon in the role of a knight named Jean de Carrouges.

Adam Driver and Jodie Comer co-starred with Damon in the film playing the roles of Jacques Le Gris and Marguerite de Carrouges respectively.