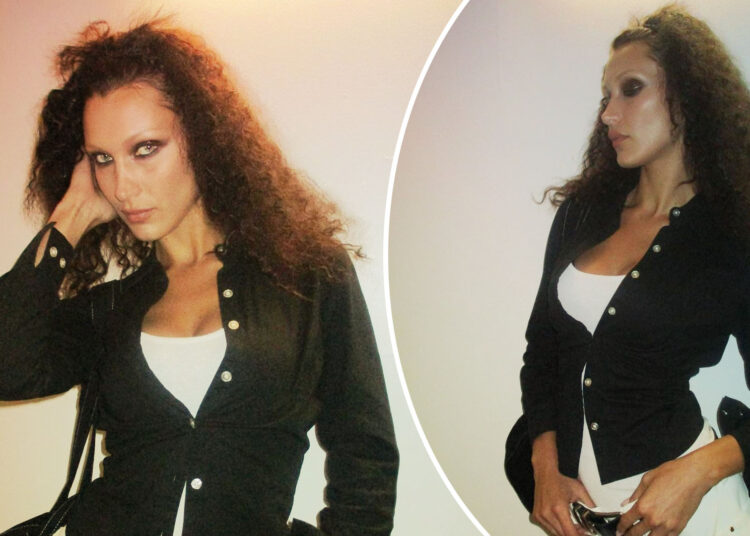 Bella Hadid is an American model who was voted “Model of the Year” by industry experts for Models.com. In addition, in four years, Hadid appeared on twenty-seven covers of international Vogue magazines.

Recently, the gorgeous model took to her Instagram and shared a series of pictures flaunting her long hair. At the first moment, Bella was wearing a white tank top, cream pants, and a black shirt. The model wore smoky makeup while her hair was curled and open.

Next, Hadid was seen kissing her hairstylist Jawara on the cheek. At the moment, her hair seemed straight with a hair band.

Bella Hadid wore more different hairstyles on the runway during fashion month than most of us will ever wear in a lifetime. Versace had short side-swept bangs, Marc Jacobs had a big, Jackie O-inspired bouffant, and Haider Ackermann had a futuristic beehive.

She also wore long extensions to the Vivienne Westwood presentation on Saturday, which she said she liked so much that she kept them for her birthday party that night. Hadid wore her temporarily long hair in a ’90s-inspired style as opposed to wearing it down like on the runway.

Hadid posted a series of pictures on her Instagram from Saturday night, in which she wore a striped vest, pants, white button-down shirt, burgundy tie, and pearl belt by Dilara Findikoglu. But her hair is a classic masterpiece, maybe cooler than the dress.

The long bottom layers are left loose while the top layer is pulled back, tucked, and secured behind the head to resemble one of the best inventions of the 90s: the Topsy Tail. But what’s happening up front is what gives it a distinct nineties feel.

Also Read: Kim Kardashian Was Seen In Tight Black Suit After Her Appearance In NYFW!

The ultimate ’90s fad, many loose, chin-length strands frame Hadid’s face. Her makeup is another example of how the 90s served as an influence. Her lipstick is much lighter than the shade that lines her lips.

This look isn’t the only one making a comeback. Other ’90s fashions seen on celebrities include chunky highlights, fluffy scrunchies, swept ends, and extremely high ponytails that are curled at the base and sharply parted in the front.

In fact, Hadid was one of the celebrities who experimented with this look. Now she’s helping revive trends, even though she was born in 1996 and probably missed them the first time around.