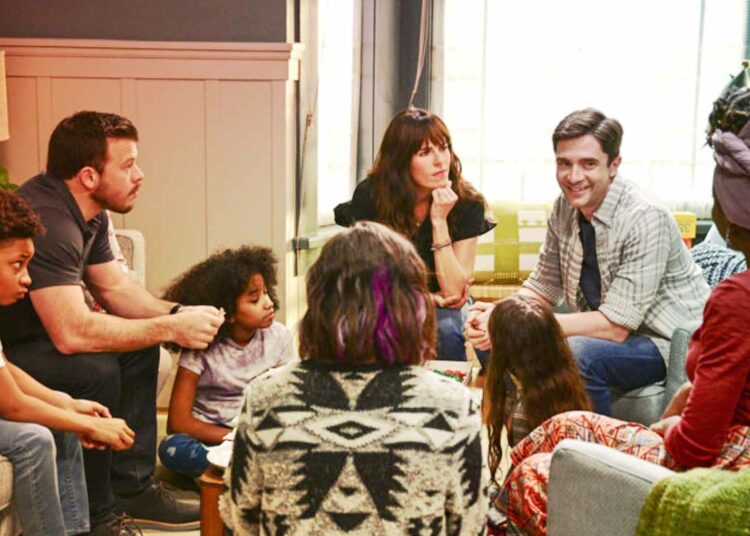 Following are the other films and tv series in which the cast members of Home Economics Season 3 have acted before:

One of the three siblings in the series is Tom, the oldest among them. He is depicted as a middle-class author.

American actor Christopher John Grace plays the role of Tom in the series. From 1998 to 2006 he was cast in the main role of Eric Forman in the period teen sitcom ‘That ’70s Show.

The middle sibling Sarah is a child therapist struggling to make ends meet who is played by American actress Caitlin Cole McGee. Before being cast in ‘Home Economics’ she was cast in another series’ central role which is Sydney Strait in the American legal drama ‘Bluff City Law’ in 2019.

The next year she starred in the recurring role of Sue in the American comedy series Mythic Quest’. Her other appearances in tv series include ‘Unforgettable’, ‘Blue Bloods’, ‘Sex & Drugs & Rock & Roll’, ‘Shades of Blue, ‘Halt and Catch Fire, ‘The Great Indoors, ‘The Marvelous Mrs. Maisel’, ‘Chicago Med’, ‘Grey’s Anatomy, ‘I’m Dying Up Here, ‘You’re the Worst, ‘Modern Love. Her films are ‘Standing Up, Falling Down, ‘Plus One, etc.

In 2017 he was cast in season one of the main role of Dylan Maxwell in the American mockumentary series ‘American Vandal’ for which he was nominated for a Critics’Choice Television Award under the category of Best Actor in a Movie/ Miniseries.

Since 2017 Tatro has been playing the lead role of Xander in the American scripted tv series ‘The Real Bros of Simi Valley. As Bodhi, he was cast as the main character Bodhi in the anthology comedy series ‘The Guest Book.

In 2021 he was also cast in the comedy series ‘The Now’ as the main character  Hal. His other tv series appearances are in ‘Homemade Movies’, ‘Drive Share’, ‘Modern Family, ‘Charmed’, ‘Tacoma FD’, ‘The Afterparty’ etc.

The films in which Tatro was cast include ’22 Jump Street, ‘FML’, ‘Boo! A Madea Halloween’, ‘Stuber’, ‘Bad Education’, ‘The King of Staten Island, ‘The Would of Snow Hollowc’ etc.

Tom’s wife Marina is an ex-lawyer who is now a stay-at-home mother. Mexican-American actress Karla Souza. In 2009 she starred in the Mexican telenovela ‘Verano de amor’ as Dana Villalba Duarta.

From 2010 to 2011 she was cast as a series regular in the role of Prisca in the comedy series ‘Los Héroes del Norte’. From 2014 to 2020 she was cast in seasons one to five of legal thriller ‘How to Get Away with Murder as Laurel Castillo and in season six as a guest star.

Souza’s other tv series appearances include ‘Persons Unknown’, ‘Niño Santo’, ‘El Presidente’ etc. The films in which she was cast include ‘Aspen Extreme’, ‘From Prada to Nada’, ‘Suava Patria’, ‘Nostros Ios Nobles’, ‘Instructions Not Included, ‘Everybody Loves Somebody’, ‘The Jesuit’, ‘Jacob’s Ladder, ‘The Sleepover’, ‘And day Shift’.