by Aashu Singh
Reading Time: 2 mins read
A A
2 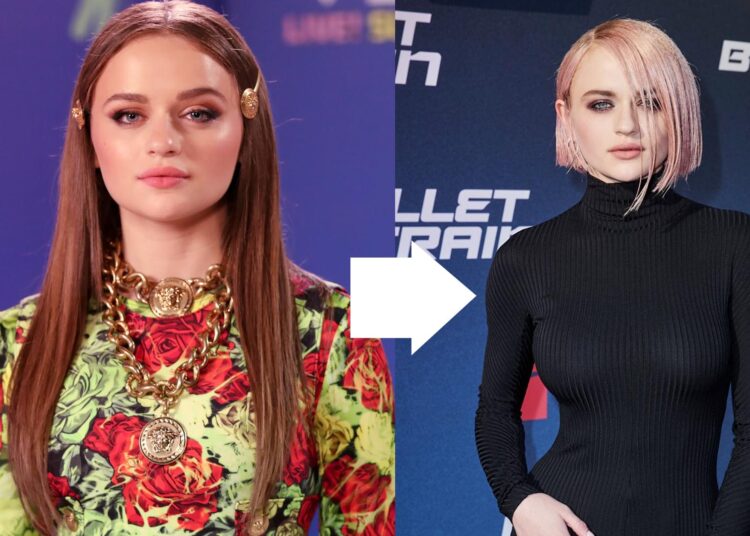 Joey King is the latest celebrity to embrace the colour pink! At the Berlin premiere of her new film Bullet Train, which also stars Brad Pitt, Brian Tyree Henry, and Bad Bunny, the 22-year-old revealed a dramatic hair transformation (among other A-listers).

Joey showed off her bright pink hair color and fresh chop at the Zoo Palast event on July 19! That’s right, the Kissing Booth actress ditched her medium-length golden auburn hair in favor of an asymmetrical bob.

Joey’s fun Barbiecore-inspired color mixed with a black jumpsuit made her look even more eye-catching. Her chic ensemble, a body-hugging number with flared bottoms, added an edgy touch to the red carpet.

While it’s unclear whether this was intentional, Joey’s hair color matched Brad’s outfit perfectly. The actor wore a brown blazer and skirt with a pink button-down shirt. As they posed together, the shades were nearly identical.

Joey King, who plays a fellow assassin in Bullet Train, Prince, also arrived on the Berlin carpet in style. She looked stunning in a black ribbed jumpsuit with long sleeves and flared legs. Her outfit was simple, but her hair and makeup were anything but. In a fun asymmetrical bob, the Conjuring star looked cool and confident. Her hair was straightened and a pretty pastel pink color.

Her eye makeup appeared to be a balance between the black outfit and her colored hair, as she wore a smokey metallic purple color on her eyelids and black eyeliner to frame her eyes.

As Joey King previously stated, the Bullet Train cast, which also includes Aaron Taylor-Johnson, 32, and Brian Tyree Henry, 40, was promoting their highly anticipated project in Paris prior to arriving in Berlin.

Joey posted a video of her trip to Paris, which included fancy outfits, tasty-looking French food like bread and escargot, and picturesque strolls through the streets of The City of Lights.