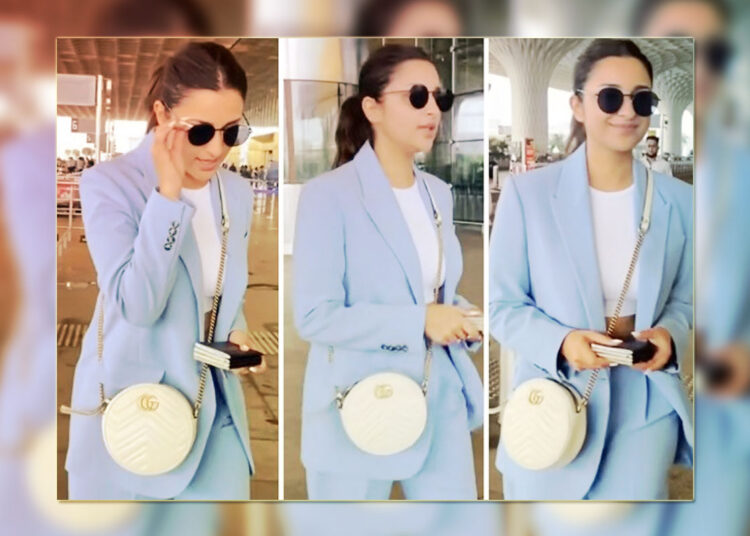 There are only few Bollywood celebs who don’t remain much in news and media attention but even their single presence is enough to make noise and one of that celebs is Bollywood actress Parineeti Chopra.

Although Parineeti Chopra isn’t buzzing in news and media these days possible because of lack of films on table and some horrible performance of her movies in past few years, still her random airport appearances are enough to get all the attention.

Parineeti was recently spotted at Mumbai Airport where she looked fresh and glazing in a blue blazer and high waist loose blue pants accompanied with a white crop top.

Let’s have a look at Parineeti Chopra’s Gucci Bag

Parineeti didn’t carry much makeup but he black sunglasses was match quite well with the co-ord, and talking about highlight the one thing that was main attraction of her appearance was the Gucci mini bag, it was white chevron leather bag with chain strap and the worth of the bag might shock you as it is priced around 1.23 lakhs.

Parineeti made her debut in 2011 alongside Ranvir Singh in Ladies vs Ricky Bahl and she also won the Filmfare Award for Best Female Debut for her performance in the film. She has been part of around 15 films in her career and was last seen in Saina which was a major failure and managed to collect just 1 crore revenue at the boxoffice.

Although Parineeti hasn’t seen much success in recent times, she has still huge fan following, she has 37 million followers on her Instagram account and her fans are eagerly waiting for her return.

Parineeti has two upcoming projects lined up, one is titled Unchai and actor Amitabh Bachchan and Anuman Kher are part of the film and the other one is titled Chamkila directed by Imtiaz Ali. We really hope to see the talented actress back on big screen soon.