Brahmastra official trailer has been released and we will definitely breakdown the trailer. 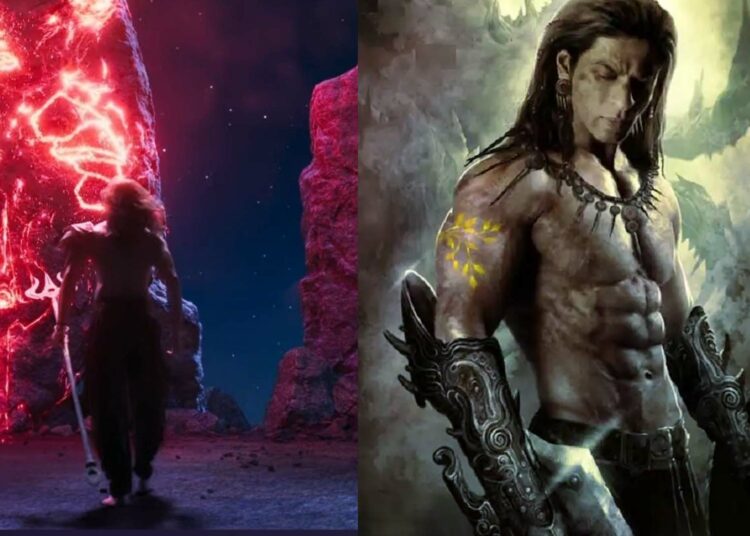 BRAHMĀSTRA OFFICIAL TRAILER has been released by SONY Music on their official Youtube Channel and we can see the grand visual effects and the different Astras of Astraverse in the trailer. The movie has a vast star cast like Ranbir Kapoor, Alia Bhatt, Amitabh Bachchan, Nagarjuna, Mouni Roy, Sourav Gurjar, Divyendu Sharma, and many more and the movie has been produced by Dharma Productions.

But have you noticed we have seen a character which is resembling SRK (Shahrukh Khan), If not then let me show you, but first watch the trailer at the given timestamp?

The character has held the Trishul, which is emitting red with fires around it. And Probably it’s the darker side of the energies that will fight with the guards of BRAHMĀSTRA in the film. And probably SRK (Shahrukh Khan) will play the role of the main antagonist in the film.

As the movie Brahmastra has been developed by Dharma Productions and we know how close Shahrukh and Karan are in real life so, it could be possible that Shahrukh Khan is the main secret that Dharma Production and the director Ayan Mukherji are keeping from us.

I mean it’s quite possible that Shahrukh Khan has secretly worked on the movies as he has not filmed for two or three years.

The fans on Twitter have also started sharing the snapshots of the character from the movie and there are skeptical about the theory that this character is actually SRK.

Although there is not any official confirmation about the cast who is playing the role of this character in the movie and we have information about each and every other character so it could be the PR and Marketing strategy of Dharma Productions and SONY to raise the hype they have intentionally not disclosed the cast.

If all goes well, We will see a separate film featuring #ShahrukhKhan very soon.

THE WAIT IS OVER… 'BRAHMASTRA' TRAILER OUT NOW… #BrahmāstraTrailer… #Brahmāstra in *cinemas* 9 Sept 2022 in #Hindi, #Tamil, #Telugu, #Malayalam and #Kannada.
Link: https://t.co/xXDJVk7uaX pic.twitter.com/9sFR5sIHLv

And here it is, the Trailer of Brahmāstra. https://t.co/lHU7NgtLXV

Get ready to enter a never seen before world of Ancient Indian Astras.

Well, that’s a theory but I think it would be very interesting to watch Shahrukh Khan in a Negative role after so many years and fans would be more than happy to see Shahrukh as a part of India’s first Multi-Superhero movie.