Brooklyn Beckham has given a cute piggyback ride to Nicola Peltz while having dinner! 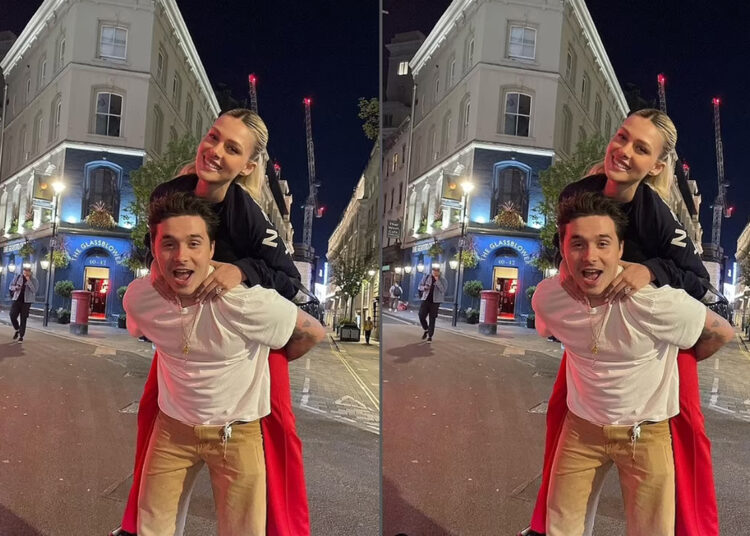 They have also shown that having a married life is nothing less than heaven. And the myth of fading love after marriage is literally nothing. Something like this is seen with the celebrity Chef Brooklyn Beckham who was seen giving a piggyback ride to his wife Nicola Peltz.

The celebrity chef Brooklyn Beckham has recently shared some adorable pictures of him giving his wife Nicola Peltz a piggyback ride. The couple is so much in love with each other and their relationship became very strong after marriage. They are obsessed with each other and can’t help but share their love on social media too.

The 23-year-old Brooklyn Beckham and his wife Nicola who is 27 years old are getting stronger than ever. The couple was photographed on 12th May as they were holding hands during a night out.

Brooklyn Beckham Has Given Piggyback Ride

They were in London and they both were looking very beautiful in black outfits. The actress was seen wearing a black dress and holding a yellow designer purse in her hand.

After sometimes both of them came on social media and shared a very adorable picture. In this picture, we can see Brooklyn Beckham holding Nicola on his back and giving her a piggyback ride. In the first picture, we can see how they both were giving a crazy pose to the camera.

While on the second picture the actress was giving her husband an adorable kiss. In the caption, Brooklyn Beckham has just written “my baby xx”.

Brooklyn Beckham was seen wearing a white t-shirt and brown pants. While on the other hand, Nicola was wearing a black t-shirt and red pants. Her hair was tied up in a ponytail and she was looking makeup-free.

It is not the first time we have seen them getting affectionate in public. A few days ago the celebrity Chef was seen with his wife in Miami Beach. They both were going to have dinner. We have also seen them at Met Gala and they both were looking very beautiful together.