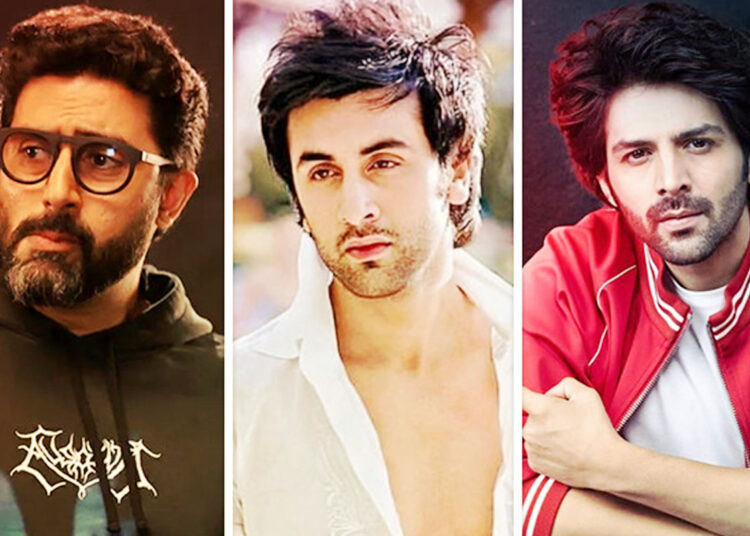 Kartik Aaryan is one of the Top Next Gen actors of Bollywood in recent times. Through his hard work and dedication, he has made his mark in the industry. He has given us many super hit movies like Lukka Chhupi, Soni ki Titu ki Sweety, Love Aaj Kal, and many more.

He debuted in the year 2011 with Pyaar Ka Panchnama which was a romantic comedy movie along with Nushrat Bharucha, the movie was a hit and Kartik Aaryan’s journey started as an actor in the industry.

He is all set to shine on the silver screens with the movie. Meanwhile, during promotions, the actor flew to Dubai along with Ranbir Kapoor and Abhishek Bachchan, and many more for the celebrity football cup 2022 which is held in Shabab Al Ahli Stadium with Emirates United. Looks like Kartik Aaryan will not leave any cards unturned to promote his upcoming movie.

While in Dubai for Celebrity Football, the Bhool Bhulaiyaa 2 Actor made Actors Ranbir Kapoor and Abhishek Bachchan dance on the Title track of his upcoming movie. He made them do the hook step of his song.

Kartik Aaryan shared a video of doing the song’s hook step along with Abhishek Bachchan and Ranbir Kapoor on his Social media handle. Both Ranbir Kapoor and Kartik Aaryan are huge football geeks and they are often seen practicing together on the fields.

Anees Bazmee’s directorial Bhool Bhulaiyaa 2 will release on 20th May 2022. Which is the sequel to the first part Starring Akshay Kumar, Vidya Balan, Paresh Rawal, and many more.