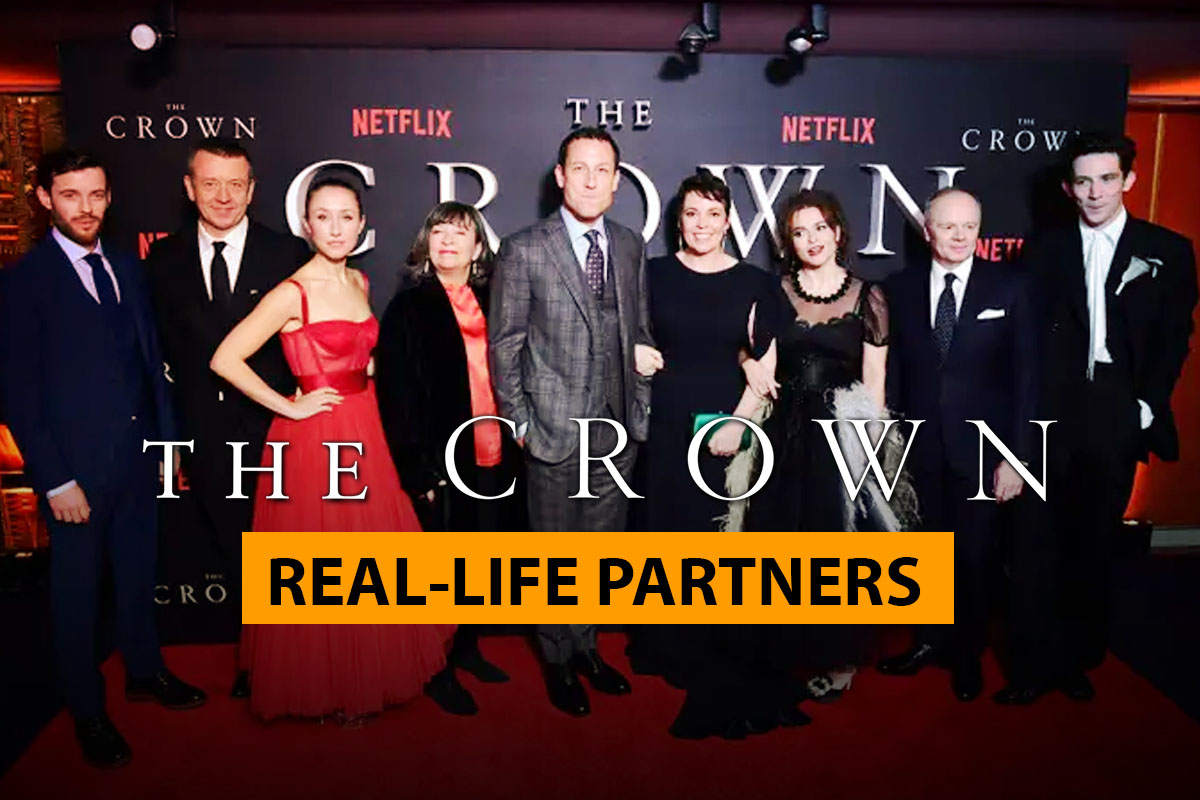 The Crown Season 6 Updates: When Netflix’s The Crown premiered in 2016, the world unexpectedly turned royalist again, enthralled by the series’ masterful portrayal of Queen Elizabeth II and Prince Philip during their formative years.

The cult show’s buzz is only poised to grow as the original cast—including Claire Foy, Matt Smith, and Vanessa Kirby—leaves to make room for the next generation of actors, who will represent the royal family in the 1960s and 1970s.

Season four’s trailer (which includes your first glimpse at Emma Corrin as Princess Diana) was recently revealed in advance of its November 2020 debut. Meanwhile, we’re delving into the romantic relationships of the series’ cast members.

These are the real-life partners of The Crown’s cast, from Matt Smith to Vanessa Kirby, across all seasons.

Olivia Colman met her husband, Ed Sinclar, when they were both 20 and appearing in a play together in London. She took over for Claire Foy as Queen Elizabeth II in seasons three and four of The Crown.

She later admitted that she fell in love with him at first sight, saying, “[I thought] that’s the person I’m going to marry… for me it was thunderbolts right away.” Colman and Sinclair are the parents of three children.

Tobias Menzies is best recognized for his role as Prince Philip in seasons three and four of Outlander. Despite having been in the public eye for a long time, nothing is known about his personal life, except that he dated Oscar-winning actress Kristin Scott Thomas in 2005 for a brief period.

Princess Margaret was played by Helena Bonham Carter in the film The Crown. In 2001, the actress began dating director Tim Burton, with whom she had two children in 2003 and 2007. Bonham Carter and Burton announced their split in 2014.

The generally secretive actress discussed the split with Harper’s BAZAAR, saying: “Divorce causes a lot of sadness since it’s the end of a relationship, so it’s very perplexing. Everything about you, even your identity, shifts.”

Camilla Shand, later Camilla Parker Bowles (and even after Camilla, Duchess of Cornwall) actress Emerald Fennell is currently dating filmmaker Chris Vernon. According to The Sun, the couple is expecting their first child and lives in Los Angeles.

Claire Foy, who portrays Queen Elizabeth II in The Crown seasons one and two, married fellow actor Stephen Campbell Moore in 2014, whom she met while filming Season of the Witch in 2011. In March 2015, Foy gave birth to their daughter, Ivy Rose, and later revealed that she auditioned for The Crown while extremely pregnant.

Moore was diagnosed with a brain tumor in January of this year, his second in a decade. The couple announced their breakup a month later, stating they had been apart for “some time.”

From 2014, when they met on the set of Pride and Prejudice and Zombies, Matt Smith, who plays Prince Philip, dated Baby Driver and Mamma Mia 2-star Lily James.

After James attended the BAFTAs with a large diamond on her ring finger, speculations surfaced in 2018 that the couple was engaged. Recent paparazzi images, according to The Daily Mail, appear to show Smith is suddenly single.

Vanessa Kirby, who made a name for herself as a teenager, chain-smoking Princess Margaret, has reportedly been dating War and Peace actor Callum Turner for more than two years. Kirby keeps her personal life discreet, although The Daily Mail reports that she and Turner have recently broken up.

Matthew Goode, who played fashion photographer and Princess Margaret’s husband Anthony Armstrong Jones (AKA Lord Snowdon) in season two, started dating Sophie Dymoke in 2005 and married her in 2014. They had three children: Matilda, Teddie, and Ralph, a son.

Greg Wise, who played Lord Mountbatten, Prince Philip’s polarizing uncle in seasons one and two of The Crown, married Emma Thompson, an Oscar-winning actress, and writer, in 2003.

They met on the set of Sense and Sensibility in 1995 and married in 2003 (Thompson won the Academy Award for Best Adapted Screenplay for the film the following year). Gaia, their daughter, was born in 1998.