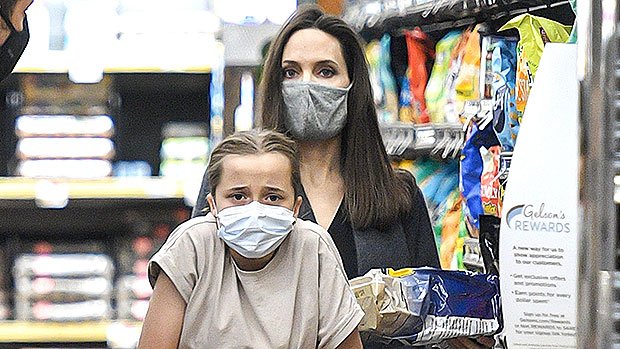 Jolie Pitt Updates: Angelina Jolie and her youngest daughter Vivienne was seen shopping at Gelson’s in Hollywood, where they stocked up on necessities.

Vivienne Jolie-Pitt, 13, has already mastered the art of grocery shopping. On a visit to the Gelson’s in Hollywood with her mother Angelina Jolie, 46, on Friday, Nov. 5, the youngster pulled her own cart.

Vivienne wore a light-colored face mask, a tan-colored t-shirt, cream sweatpants, and black running shoes with her blonde hair pulled back in a ponytail.

Angelina trailed close behind, holding what appeared to be a bagged loaf of bread, ready to be added to the cart.

The Oscar winner wore a gray face mask, a black dress, and a charcoal-colored sweater in her trademark classic tones.

She completed her look with a pair of pony black boots, which were visible as the two walked back to the parking lot.

The mother-daughter combo shared a lovely hug while shopping in the frozen foods area at one point.

Jolie Pitt And Her Mother Angelina Both Are Doing Shopping

Vivienne and her mother are said to have spent about 40 minutes shopping, bagging, and bringing their own purchases back to the car.

The Eternals actress grabbed one by the handle, while her teenage daughter carried the second from the bottom with both hands.

The 13-year-old, who has a striking resemblance to her attractive father Brad Pitt, 57, has recently grown in stature!

Her growth spurt was seen in the grocery shop, as well as at a recent stop at H&M in London, England, where she was there to support Angelina Jolie for her Marvel debut.

Vivienne was a head shorter than her mother, but she is on her way to catching up in height (notably, her sister Shiloh, 15, is also very tall).

Angelina Jolie put her arm around Vivienne as the two walked through the crowded Oxford Circus area on their way to the Swedish apparel brand’s flagship store on Regent Street.

Angelina chose a long button-down wool cut coupled with black pumps, while Vivienne wore a casual white t-shirt and gray sweats with shoes for the outing.